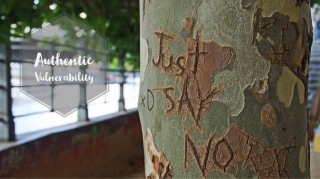 This week there has been a video going around Facebook by John Crist, and I finally watched it this morning and laughed. Mainly because of the truth of what he was saying, but also because I know I am guilty for using those very statements. Instead of saying no to someone, or something, I would say, “Let me pray about it.” Or one of the other “cliché” answers that I succumb to use on various occasions because I didn’t want to hurt someone’s feelings by saying no. However, how many times did I miss out on a blessing because I didn’t say no.

I’m not saying that we should always say yes, because there are definitely times when we need to say no. But why do we feel like we should put the “blame” on God? I heard someone talking once about people who are trying to find “the one” and how he always hears people say things like, I’m waiting for God to find the one for me. And he made the statement that if his daughter grew up and wasn’t able to make a decision for herself that she knew he would be happy about then he hadn’t done his job as a father. In the same way, we should know our Father in the same way… to where we know what He wants without having to make excuses.

Papa gave me a brain, I have a relationship with my Father… and even though on the bigger decisions in my life I am prayerful about… it doesn’t mean I should feel like I have to.

For instance, back in January I started a conversation between my dearest friend at work, my mom, my pastor, and a few of my closest friends to discuss my future this upcoming year. Some people might think it crazy that I didn’t initially go to God, but I knew what I should do… I wanted to talk it over with those in my life who are wise and has been placed in my life to help me talk about decisions I need to make. The final conversation happened between Papa and I and I asked Him if I really should… to which He replied, “Do you trust Me?” So I said, “Yes.” And he said, “so why are we having this conversation?” I knew that He was speaking truth to me. I already knew the answer, so why did I need Him to tell me.

Papa made me. Papa gave me a brain. I’m no longer a little kid. He has placed people in my life to give me people to talk things out… but ultimately, all of those people said it was my decision. Even Papa said it was my decision. And even if I would have chosen to stay at Blue Ridge it would have been my decision and He would have blessed me. However, I have learned that sometimes when I put complete trust in Him… when I don’t have complete control over my circumstances I am able to put complete trust in Him and relinquish control… currently it was about relinquishing control of my bank account.

So, my challenge to you is to really think through each time someone asks you something. Don’t flippantly say, “I’ll pray about it.” Or “God doesn’t want me to.” Etc. If you do not want to do something. Say so. Stop “blaming” things on God. Be an adult. Be wise. Use the brain God gave you. Continue to have conversations with God about your plans, but trust yourself to know Him enough to know that He wants good things for you and if you’re wanting to do something… go for it! Doors will close if they need to close for you to go a different way.

This site uses Akismet to reduce spam. Learn how your comment data is processed.